As SterlingLand aims to promote a nature-embracing community, the team lead by Marilou A. Padilla, President and CEO of SterlingLand want to be a catalyst for spiritual growth in the community as they harness devotion and faithfulness by setting the 26-foot shrine of Our Lady of the Miraculous Medal as the core of the development.

Developer targets to build 3T homes in Cebu in 3 yrs

Property developer Sterling Land Residences and Development Inc., is building at least 3,000 homes in cebu in the next three years, riding on the sustained high demand stride for real estate in the province. 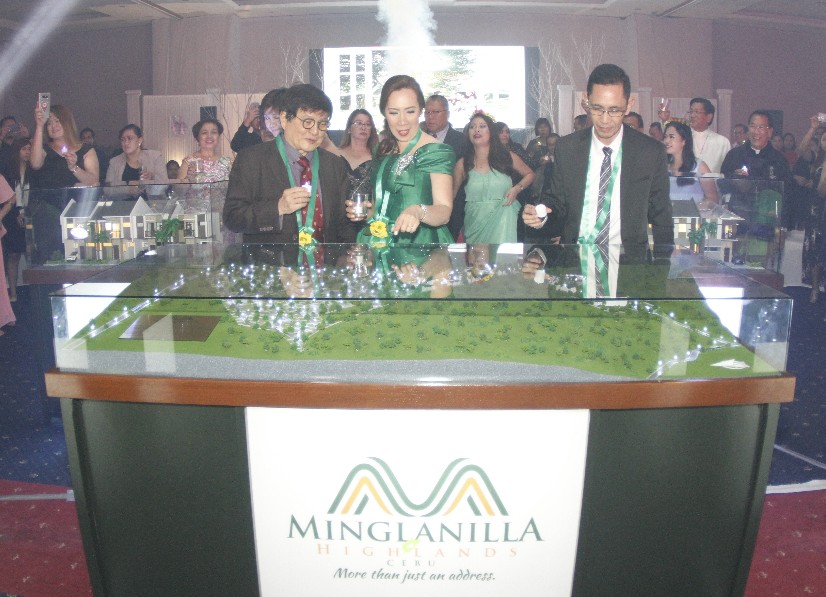 The successful launch of SterlingLand’s newest property development, Minglanilla Highlands, last 13 December 2017 at the Waterfront Cebu City Hotel signals a paradigm shift towards developing communities in Cebu. Located on an uphill site in Tubod, Minglanilla Highlands offers scenic views of the sea and mountains from its 20-hectare expanse.


Sterling Land to put up Nursery in Minglanilla Highlands

STERLINGLAND eyes 1,100 houses for next 15 years

A LOCAL developer is expanding in the town of Minglanilla and is set to build over 1,100 houses over the next 15 years. Sterlingland Residences and Development Inc. said it will be investing P2 billion for its mixed-used project, Minglanilla Highlands, in Barangay Tubod where aside from houses, it will also be building commercial structures inside a 25-hectare property. More than just houses, the plan is to have Minglanilla as a tourist destination, said Sterlingland president and chief executive officer Marilou Padilla during the groundbreaking ceremony of the project yesterday. In an adjacent property, spanning half a hectare, the local developer will develop the Minglanilla Lifestyle Hub, a mountain-resort inspired development, which will be open to the public. "This is our largest project for us in Sterling Land," said Padilla. The developer has two existing projects in Talisay City, one of which is the Sta. Monica Estates. Within the property in Minglanilla, Sterlingland will also put up a collosal image of Our Lady of the Miraculous Medal inspired by Christ the Redeemer in Rio de Janiero, Brazil, to be designed by Cebuano sculptor and architect Vic Gulani, as well as a wedding chapel. The developer remains confident in Minglanilla, despite heavy traffic in the municpality and the lack of road networks. Sterlingland chairman Eduardo Padilla said they are closely coordinating with the local government unit and was informed of the future plans for Minglanilla, among which is the planned improvement of road networks and the anticipated Talisay-Minglanilla-Naga bypass road. Minglanilla is a first-class municipality and is home to a number of subdivision projects in the southern part of Metro Cebu. Read more: Follow us: @sunstaronline on Twitter | SunStar Philippines on Facebook
Tuesday, April 18, 2017 By JEANDIE O. GALOLO

Cebu-based developer SterlingLand Residences and Development Inc. is poised to spend over P2 billion in the next 14 years for a luxury mountain resort community in the southern town of Minglanilla. Minglanilla Highlands, which will soon rise on a 25-hectare uphill property in Barangay Tubod, is SterlingLand's third and biggest project in Cebu.

"We have big plans for Minglanilla. The objective is for Minglanilla to become a city. It's very beautiful here, with all the surrounding areas, the scenic views, and everything. We will capitalize on the views and attract investors, tourists, and businessmen to put their businesses here in Cebu," said SterlingLand president and chief executive officer Marilou Padilla during the groundbreaking ceremony for the project on Tuesday.

Padilla said that while they believe in the potential of the town, it is also their responsibility as developer to help develop economically the locality where they set up their business.

Padilla said the development would be divided into four phases, with phase one alone costing "millions of pesos." Land development officially began on Tuesday and will take approximately one year to complete, to be followed by construction for phase one. Renowned Filipino architect and urban planner Felino "Jun" Palafox Jr. is doing the conceptual master plan for the project. Phase one will include the construction of around 330 of the planned 1,140 units which include townhouses, duplex, and single detached units as well as a portion of the Minglanilla Lifestyle Hub, where major institutional amenities like a religious shrine, a wedding chapel, and a mountain resort clubhouse will be located. Padilla said phases one to three, excluding the lifestyle hub, would purely be residential while phase four would include a retirement village, an orchard, and other amenities. The lifestyle hub, to be built on a half-hectare property adjacent to the residential component, will be open to the public.

Aside from positioning itself as the next lifestyle destination in the south, it is also primed to become a cradle of spirituality, with the colossal image of Our Lady of the Miraculous Medal inspired by the Christ the Redeemer in Rio de Janeiro, Brazil, to be designed by top Cebuano sculptor, Architect Vic Gulani. Each phase will take around two to three and a half years to complete, the developer said.

Minglanilla Highlands will target the upper mid-market segment including business executives, overseas Filipino workers, business process outsourcing workers, and those married to foreigners, among others.The price range for each housing unit will be P3 million and above, all being two-storey structures with four bedrooms and one to two car parks, located uphill or downhill, depending on the buyer's preference.

According to the developer, every feature of the project will be designed with environmental sustainability in mind and the concept that "a community is a living part of its natural surroundings and not something to be built at nature's expense." It will be designed to cluster houses that will follow the natural contours of the environment to have minimal damage and effect on the natural setting, allowing for a more harmonious relationship between people and nature. SterlingLand was established in 2013 after Cebu-based Schillings Finance Corporation decided to diversify into real estate in response to the growing need for residential housing among the middle class.
Read more: Follow us: @inquirerdotnet on Twitter | inquirerdotnet on Facebook
Tuesday, April 18, 2017 By Victor Anthony V. Silva

CEBU, Philippines - Another mixed-use housing development will soon rise in Minglanilla, Cebu as a local developer banks on the economic growth potential of the municipality. Sterlingland Residences and Development Inc. is to set to start the construction of the 25-hectare Minglanilla Highlands, a township project in the town's Barangay Tubod, which will be done in four phases. This is the firm's third housing project in Cebu; the other two are located in Talisay City. In an interview yesterday at the project groundbreaking, President and CEO Marilou Padilla said the four phases will be completed in about 14 years, producing a total of 1,100 housing units. This is seen to address the consistent growing housing demand as the company targets the middle-income market including overseas Filipino workers, executives, and locals who are married to expatriates. She said the first phase will have over 300 units and will be completed three years from now. Freeman ( Article MRec ), pagematch: 1, sectionmatch: Padilla said the whole project is estimated to cost some P2 billion. The developer has designed the project to be an integrated township development, with globally renowned urban planner Architect Jun Palafox doing its conceptual master plan. The residential mountain resort project is approximately 2.8 kilometers northeast of downtown Minglanilla, located on a 25-hectare uphill site. Padilla said the property firm has also designed the project to be a residential-tourist destination as it will have a colossal image of Our Lady of the Miraculous Medal inspired by Christ the Redeemer in Rio de Janeiro, Brazil to be designed by top Cebuano sculptor Architect Vic Gulani. The residential project will also have other amenities such as a wedding chapel, lifestyle hub (where various dining and recreational facilities will be housed), pool, day care center, retirement village and organic landscaping. There will also be commercial establishments and arcades to be built. Sterling was established in 2013 and has been engaged in the financing business for 28 years before it entered the property development sector four years ago. Minglanilla, a first income class municipality of Cebu's south, is home to a number of housing projects. It is hoped to become a city soon given its growing economic activity and population. Read more:
Tuesday, April 18, 2017 By Carlo Lorenciana/

Minglanilla Highlands Cebu Is the new brand of "Affordable Luxury Residences" by Sterlingland Residences and Development Inc. It boasts of a spectacular view of the sea and the city, having been nestled at the top of the most beautiful scenic spot in Tubod, Minglanilla. This will be a highly coveted and most prestigious address in Minglanilla with no less than the World Renowned Urban Planner, Architect Jun Palafox, doing the Conceptual Master Plan with modern international house designs,